If you know me you know my background is in theatre.

As a young girl, I sang and danced around my living room to the score of various Broadway shows Finian’s Rainbow, Dr. Doolittle, My Fair Lady, and best of all, West Side Story.

When I got cast in the Chicago All-City High School production of West Side Story as Velma, one of the Jet’s girlfriends — which we performed at the Lyric Opera House — I was over the moon. So engrossed was I in the show each and every night that I cried in the wings when Tony got shot, and once even forgot to go back on stage for the final scene.

Fast forward a few decades and here I am in NYC, privy to some of the finest theatres in the world. When I see a show part of me is sitting in my seat as a spectator, but another part of me is longing to be on the stage with the actors. It’s like having a craving that you just can’t quell. That’s why I’m so happy to be a full-time voiceover artist because I get to perform every day. 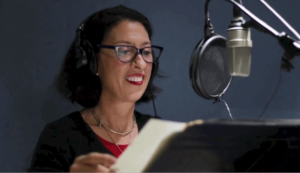 Recently my husband and I saw Hamilton, the blockbuster (sold out for a year) Broadway smash hit, hip-hop historical musical about an impoverished immigrant who went on to shape the future of our country. The music is a combination of rap, jazz, funk, pop, and classical Broadway stylizations.

Once again I was swept away. I’ve been caught in a hurricane of emotion, thought, history, music, drama, tragedy, musical references spanning 100 years, and more. I dream about the show and when I wake up lines of music are stuck in my head. Lines from the score echo throughout my day — “bastard, orphan, son of a whore…” “I want to be in the room where it happens.” “Who lives, who dies, who tells your story.” “That would be enough.” “How lucky we are to be alive right now.”

It’s hard to explain the magic of art. The transformative powers of music, dance, visual art, video, film, and writing; these art forms can, each in its own way, speak to our souls and make us stop to think, question, aspire, to grow.  I’m so grateful for being able to be so moved. For me to move another in such a way would be transcendent.

And if we ever needed a reminder that history repeats itself, this show is it. Divisiveness between people with different ideologies, whose rhetoric is to be trusted? Whose personal aspirations are driving the train? Whose aspirations are being driven by what’s best for the greatest number of citizens, even if it costs votes, ratings, and TV time?

It’s easy to be apathetic, throw one’s hands up, and say, why bother? I’ve often felt such exasperation. But we must fight to support some semblance of a vision we believe will raise the tide and with it all boats. In the words of Hamilton, when challenging Aaron Burr on his lack of convictions, “If you don’t take a stand what will you fall for?” A double entendre if ever there was one.

And as we point accusatory fingers across the proverbial aisle, we have to be willing to make concessions as well, since no one candidate is perfect. No one idea is without consequences, side effects if you will. We are all flawed. Let us choose those whose merits have been demonstrated, whose intentions are true, and who like doctors, take the oath to first, do no harm.