Your words, my voice. That’s what I do. I talk for a living.
Recently I had the distinct pleasure of being interviewed by Sandi Klein for her podcast Conversations with Creative Women.

Do you know the old saying, time flies when you’re having fun? Well, it flew by during our recent sit-down. That’s what a skilled interviewer can do — make you feel so comfortable that you open up, let your guard down and share your soul.

Aside from enjoying our casual conversation (all that was missing was a glass of wine!), it was cool to be in a studio that I spend a lot of time in. At ProMedia.NYC, I’ve recorded spots for Jennifer Furniture on a regular basis, HSBC, and other clients. Maybe for that reason, I was comfortable with this conversation as well since I was in ‘my studio’ away from my studio.

Expanding the Conversation – Looking Back At My Early Experiences 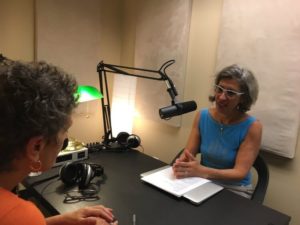 With Sandi’s encouragement, we looked back over my work/life since I came to NYC in 1980, including:

Sandi saw a thread amongst all these disparate careers. A brave woman who is willing to change course, to start a new path of learning and growing and ultimately succeeding. I think she called me ‘brave,’ which is not a term I think of when I describe myself. But as I pondered her observation, I had to agree. Perhaps living in Italy when I was a child and going to Italian public school for a year helped me to understand. There’s a world of ‘difference’ out there and to embrace it.

I was in 4th grade and in spite of some Italian lessons I took with my siblings I was hopelessly lost in my first few months of school. This was before we left Chicago for our year in Rome in which I learned all of “si,” “no,” and “per piacere,” along with some opera. However, I knew how to read body language and tone of voice well enough to know what my teacher was saying to me. She called me up to her desk in front of the class and asked, “Perchè non vai a una scuola Americana?” “Why don’t you go to an American school?!”

I didn’t have an answer for multiple reasons, but after three months I became fluent in reading, writing, and speaking Italian. And, in short order, became her pet. 🙂

The ultimate lesson I learned was that by sticking with the challenges, struggling through them, and ultimately overcoming them, you get to the other side. This is where there are rewards and experiences you never knew existed.

And that’s been my experience in the world of voiceovers as well. I wrote a 17-part blog series titled #VOnow, in which I chronicle the path to success in being a voice actor. It took a heck of a lot more than 3 months to become an accomplished voice actor. However, that same tenacity, commitment to excel, and ability to recover from countless falls along the way, have served me well and brought me to where I am today.