When I was a little girl, Sunday’s treat was going to Tai Sam Yon. It was the best Chinese restaurant around and just happened to be in a slum. I grew up on the Southside of Chicago in Hyde Park in the 1960’s. Bordering the neighborhood were slums to the North, South, and West (Lake Michigan was to the East).
That was my first exposure to anything Chinese.

But my neighborhood was racially mixed and ethnically diverse because the University of Chicago was nearby and drew multi-cultural families; so I was exposed to people of different backgrounds growing up.

It wasn’t until many years later when my daughter, Sarah, took Chinese for her language requirement in high school that I had an inkling of what this particular culture was about. You learn a lot about a people through their words, and given my fondness for speaking foreign languages (Italian and Spanish) and learning snippets of new ones when visiting those countries (Turkey, Japan, France), I picked up a few words as my daughter studied. My crowning moments were the shocked look on the faces of the ladies in the nail salons when I uttered a phrase or two. 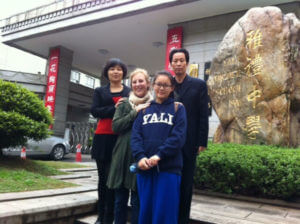 Sarah in China with Yali Sue

When Sarah took a trip to China with her classmates, the stories she shared on her return were truly foreign; from the types of food she ate for breakfast (pork and corn soup), styles/customs of eating (spitting bones onto the dining room floor), to the interpersonal physical boundaries (or lack thereof, as many people approached to take her picture without asking), to name a few. When the daughter of the host family that she stayed with came to visit us, I could sense her equally complete and utter disbelief in the things we put on the table for breakfast (yogurt, granola, cereal and eggs), and wonderment with our ways of interacting. 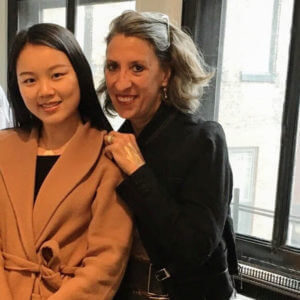 Fast forward to my world of voiceovers, and over the last couple of years, I’ve had the opportunity to work with Christian Chinese clients and get to know some of the brothers and sisters from the congregation who direct me in our sessions. My role is to speak God’s words in a sermon-type of recital, which is sometimes nearly 10,000 words/an hour long.

To a person, they are kind, respectful and appreciative of our working relationship. Our wonderful partnership is enhanced because they value my expertise, attention to detail, editorial suggestions and performance, along with my willingness to teach and guide them, so they can be more successful in how they interact with other voice actors. They know I care about the excellence of the finished work as much as they do.

One of my goals for the new year was to meet them, so I traveled — not to China, but to the outer boroughs of NY— and had a session in their studio. I think it was mutually gratifying to be together, I was so happy to see their young faces, and they enjoyed watching me perform, as we had only known each other’s voices while spending countless hours recording together.

There’s a lot that I don’t understand in this world, but I know love when I feel it, and any chance I can get to receive it and give it is a blessing. Speaking of blessings, that’s exactly how they sign off their emails to me; not with the words, ‘Best,’ ‘Regards,’ or ‘Thanks,’ but ‘Blessings.” At first, it was foreign to me, but I’ve slowly been adopting it and like the idea that I can share good will in that way. After all, who can’t use an extra blessing in a day?

“Beholding the Appearance of God in His Judgment and Chastisement”

So, with that, I’ll wish you a Happy Chinese New Year, may the rooster awaken all kind of good things in your life. And a special happy birthday to all you Fire Roosters! (1957, 2017) 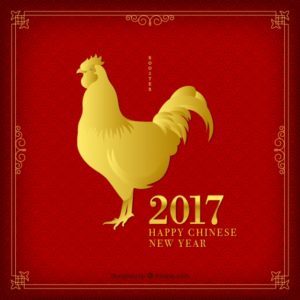 BONUS: There’s no ‘Year of the Lion,” but you can see The Mari-Cha Lion at Asia Society Hong Kong Center from now until February 19th!