As a kid, I walked down Michigan Avenue in Chicago with my family as we marched against the war in Vietnam. Once again I am finding issues that touch me, my fellow voice actors, colleagues, friends, and family, and am willing to stand up to have my Voice ‘Be Heard‘ on our behalf. In December 2015, I joined New York City Council Members, labor leaders, and local freelancers inside the chambers at City Hall, across the street from where I live, to rally for the #Freelance Isn’t Free bill. 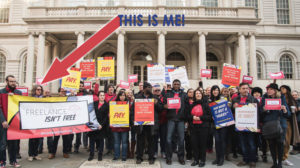 For most of 2016, we fought, making the case to legislators about the importance of enacting a law that would protect freelancer’s economic rights. On October 27, 2016, NYC became the first city in the nation to protect independent workers against nonpayment with the passing of the historic Freelance Isn’t Free Act in New York City.

The success of the initiative came from the combined efforts of freelancers, unions and businesses that rely on and value our contributions.

Nationwide there are over 55 million freelancers, and the numbers are on the rise. In NYC nearly 40% of the workforce freelances.
Having the ability to create our schedules, pick and choose our clients, and work for our bottom line are just a few of the myriad reasons why freelancing has become so popular.

On the flip side, however, a staggering number of freelancers have trouble getting paid for their work, waiting weeks, sometimes months to get paid, and at times, not getting paid at all. (This happened to me once.)

For voice actors in particular, many of whom live in small towns across the country and work exclusively with clients online, these protections would be invaluable. Those voiceover artists who book work through the SAG-AFTRA union do have protection, but a significant amount of work happens globally outside of the union, with no collective legal backbone to protect our rights.

I’m happy to say that, except for one project (the guy turned out to be a crook, literally), my clients always pay. As a freelancer, you don’t have the luxury of a steady weekly, or bi-weekly paycheck. Companies don’t think they need to pay you quite so promptly, and there are countless stories of having to wait for 30, 60, 90, 180 days or more to get paid, which has happened to me as well.

“This bill would establish and enhance protections for freelance workers. Specifically: the right to written contract, the right to be paid timely and in full and the right to be free of retaliation. The bill would create penalties for violations of these rights, including statutory damages, double damages, injunctive relief and attorney’s fees. Individual cause of action would be adjudicated in state court. Where there is evidence of a pattern or practice of violations, the Corporation Counsel may bring civil action to recover, on behalf of the City, civil penalty of not more than $25,000. This bill would also require the Office of Labor Standards (OLS) to receive complaints, create a navigation program, and to gather data and report on the effectiveness of the law.”

I’m proud to be a member of The Freelancer’s Union. I’m also a proud member of SAG-AFTRA (Financial Core), which allows me to perform union and non-union work legally, and WoVO (World Voices Organization).

WoVO is a non-profit member-driven international association of voice actors that works to inform and educate voice actors and those hiring voice actors regarding best practices, standards for ethical conduct, and professional expertise.

“We communicate voice acting’s importance to the public and business leaders and affirm the power of professional quality voicing and recording, and inspire through articles, portfolios, recognition of achievement and excellence. We represent and advocate for the profession and stimulate discussion within the industry through events, social media, and websites.”

So, get involved, stayed involved and fight for what you believe in.
And we’ll see how together we can have a positive impact in 2017.