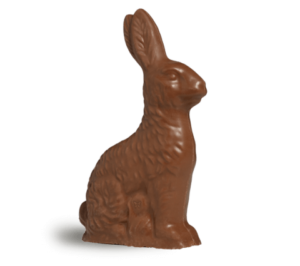 Just finished a session with Tag Creative for some ‘Chocolatey’ radio spots, airing now, just in time for Easter. Present were a producer from one company, the writer from another company, and the sound engineer at the third company, Flavorlab, the studio we were working at. It turns out I had worked with one of the guys before, and shame on me when I checked my contacts I couldn’t find a record of him in my notes.

But, I recalled his style of directing, and although we tossed a few projects out to see if that’s where we had collaborated, the clincher was at the end of the session when I handed him my chapstick. “If we worked together before, you’ll remember this….” I said, and indeed he did.

This is a photo of one of my chapstick. My audition for this project was filled with alternative reads (also known as ‘alts’), amongst three reads, and they liked that.

The producer was so sure that I was right for this job that they were tempted to create the spot from what I’d sent them and send that to their client for approval. Instead, we had a quick live session. But it’s an incredible feeling knowing that your interpretation of the copy was spot on, (no pun intended), and the quality of the audio from my studio was perfect. Guess what; the studio had the same mic that I record on, the Sennheiser MKH 416.

They were clear on what they wanted the radio spot to sound like:

“Kind, warm and friendly, but NOT down-to-earth or folksy. Teacher-ly, smart & confident, but not pushy. Quality and upscale, but not cold or affected. A voiceover not too young sounding (20s) or too old (60s) — NOT: whispery, cosmetic-y, accented, cutesy, ditsy, fragile.

Note: we have a full 30 seconds of copy, so we’ll need a pro who can make it feel not rushed.”

I gave them what they wanted, even when the direction was to “have 2% more fun”. And there was a 15-second spot that also needed recording, where I had one extra second of time to ‘romance’ certain keywords in the copy. All that training with Joan Baker many years ago — of drilling 10-second and 15-second reads so that I would know how to shave or add a second or two wherever necessary, paid off. It’s a good feeling to know you’re good, and have the creatives know it too.

When they sent a version to their client, I willingly waited. The response never came, but they felt they had enough options recorded that they’d be able to insert a different take if the client had any comments. I offered to hop back in the booth to reread a line they were swapping out, but they said no thanks, they had plenty of alts to work with.

While we waited and shared small talk, the engineer worked on the sound design — adding music and sound effects to bring the spot to life. As soon as they were confident they had what they needed and ‘released me,’ I was gone. No lingering around, no further small talk. I’d managed to give them my card and chapstick while we were in holding mode, so it was time for me to vamoose!

But not before thanking the studio director, and making sure she had my card and chapstick too. 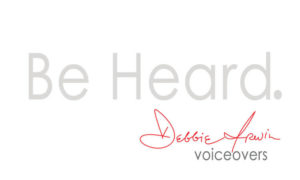 This is the front of my business card.

Being friendly comes easily for some people. I’ve worked on this skill, which is just a matter of being open and being myself with no veneer (more on this topic in my next post). I’m happy to report that I’ve seen great improvements and can feel how it makes interactions easier for other people as well. So, be good, be willing, be gone, and most of all, Be Heard!